Util to alter metadata and optionally set an offset to Wave or BWF files.
Current version is 1.0.1

It was intended to promote Wave files from non-tc capable recorders to BWF, based on the internal clock of the recorder. (Thus, the file creation time as a basis.)
So, if you find a specific spot where you know the TC, you can set it and all other recordings get the right timestamp as well.

You can also set all metadata as is found normally in BWF files, or alter that if the files are BWF already.

I have finished yesterday the shooting of a 52 minutes film on Rhein river (Deutschland/Switzerland/Netherlands).

Shooting is with GH5s (4K) and with a sound guy that uses SoundDevices 633 (and also a few others cameras like drones, go pros, etc….)

All in sync with Tentacle Sync modules on every device (real timecode for some, audio timecode on the others).

As in Resolve (we use it for transcoding and color grading later) you can’t to a batch offset on clips with timecode audio generated, I was searching a software to modify the BWF files from sound devices. And your tool is perfect (really) to do that.

So I applied a +12 frames offset on the entire audio clips, and when starting sync in resolve, everything is ok now. 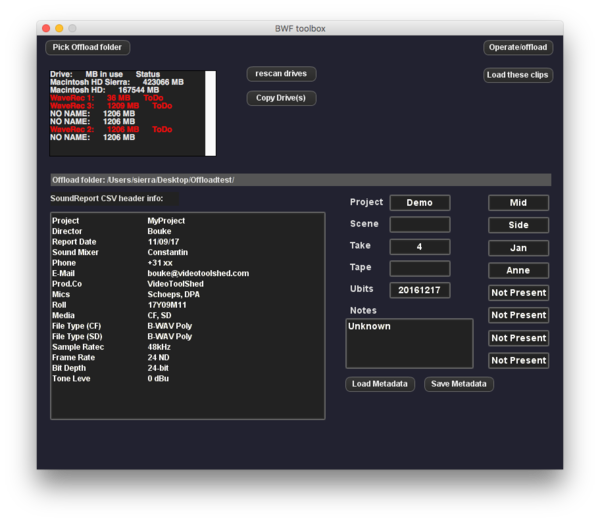